My master thesis explored the origins of customization on desktop computers and smartphones and how the hacker communities and culture provided users a complete toolbox to hack their devices, taking personalization to the next level. 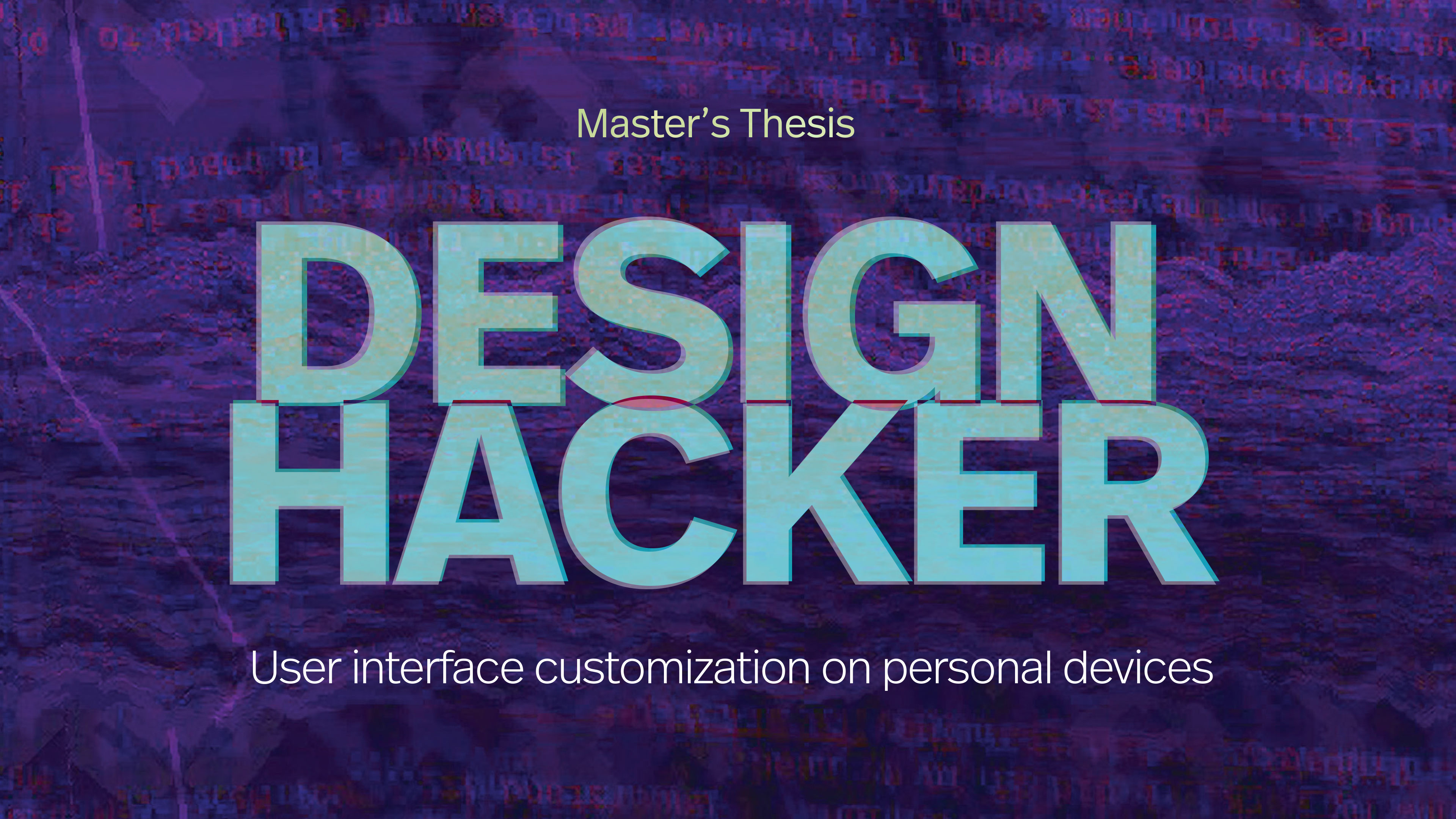 The popularization of smartphones, which started to happen in the last ten years, has been directly affecting our relationship with society. On average, we check our cell phones 74 times a day. And among the younger users, from 18 to 24 years old, the frequency increases: 82 times, according to global data from ComScore. An object so personal and at the same time, uniform: we just need to have a quick peek into screens around us to see that they, in fact, look pretty much the same.

History of customization on user interfaces

In order to understand potential appearances of interface personalization on the operating systems of personal devices, the research focus started with an archeological mapping of the graphic user interface under the lens of customization. Focusing on the origins of the interface based on the desktop metaphor, more than 15 versions of Operating Systems were catalogued, by using emulation, virtualization and historical technical documentation when running the systems wasn’t an option. Since the focus was proprietary systems, the documentation covered Microsoft Windows, Apple macOS and iPhone’s iOS. Linux and Android, being open sourced, were not considered on this study.

From the Desktop perspective, both Windows and Mac had distinct iterations of customization across versions, varying from time to time on being more open and closed. On Microsoft’s side of things, the system has been relatively open to user customization, having products sold specifically with the purpose of giving users even more assets and themes to personalize the interface, like Microsoft Plus! for Windows 95. With the evolution of Windows, however, Microsoft don’t particularly focus on customization, but allow external developers like WindowsBlinds, to fully access resources in the system necessary to cosmetic modifications on the graphic interface.

On macOS, the options for customization have been more restricted since the first version of the operating system. With some visible developments on Mac OS 8 beta, the possibility of customizing didn’t appear on the retail version of the software. According to internal documentations, Steve Jobs was explicitly against giving the users options to alter the interface appearance, aiming for a streamlined, controlled experience on Apple products. In order to access the necessary resources, third-party software like Kaleidoscope and Flavours made use of vulnerabilities on the system, often corrected during system updates, making the customization of devices a lot harder.

On the iPhone, the fruit didn’t fall further from the tree, and the customization options have been even more restricted than macOS in every version of iOS. In order to customize their devices, users had to search for resources not available as a shelf product. The tools necessary were found in the hacker community.

Kaledoscoipe themes, for macOS: designed by the community

Breaking the code towards personalization

Popular archetype in science fiction, the hacker is usually depicted as a superhuman, with virtually infinite abilities to interact with networks and computers - from Case, a virtual hacker who banished from cyberspace fights for his reinstatement in Neuromancer, originally published in 1984, to contemporary fiction, such as Elliot, the anti-hero protagonist of the Mr. Robot series, televised since 2015, whose malware affects one of the most important corporations, leading society toward an unprecedented economic and social collapse. The mystical figure of a guy in a hood, sitting on a dark room typing in a screen full of green text code breaking through code as a superpower is way different from the reality, but is not fully unfounded.

In the late 70s, computers were not personal. Usually, those bulky machines would sit on laboratories on selected universities as a shared resource for research. And although they were way more limited from the machines that would appear on the following decade, it already attracted students interested in the potential of computers had beyond batch calculations. By monitoring unused computer lab appointments to sneaking in during the night, communities would use the machines to run home-made programs that were not what the machines were assigned to, experiment with commands and even play games. Those were the original computer hackers and exploring systems to unlock their true potential is what connects the origins of the practice to current hackers, which sometimes remain anonymous, but not snitching into locked rooms to use the only computer in a 300km area, therefore hiding in the dark with a green screen anymore.

“The word [hacker] originally meant an inventive type, someone creative and unconventional, usually involved in a technical feat of legerdemain, a person who saw doors where others saw walls or built bridges that others thought were planks on which to walk into shark-filled seas”

Jailbreak hacking as a power enabler towards customization

Putting together the popularity of Apple’s iPhone and its locked ecosystem, it didn’t take long enough to attract hacker communities around the task of unlocking it. Although the first motivations on cracking the protections of the device was to unlock it in order to use any carrier (the first iPhones were locked to AT&T in the United States and different carriers across Europe, depending on the country), the ability to access and alter any aspect of the phone’s system attracted the customization communities across pre-smartphone era modders and desktop customization enthusiasts. The process of obtaining access to the roots of the device system is called jailbreaking.

Although the term was used before in order to unlock digital systems and devices (making DVD players region-free, for example), it quickly translated into a set of tools and process spread across distinct internet forums, discussion channels and blogs. Detailed instructions, resources and even complied “plug and play” software was available to anyone who wanted to get access to their systems and install unofficial software and alter base code files. A popular “alternative app store”, known as Cydia, could be connected to any independent software repository, enabling the download and install of apps, customizations, patches and more. With that, hackers enabled new features of the system originally locked to newer devices, apps that were banned from being sold at the official Apple app store and, of course, an almost infinite supply of customization tools – tweaks.

On the thesis, the most popular tweaks were tested, and to pay homage to the original hackers – nodding in a circle back to reobtain the origin story and visuals attached to it and unvillainy the hacker figure, an original iPhone 4 was used as a base to a prototype that went through the jailbreaking process and further used to install tweaks and develop this hacker-inspired artwork supporting the customizations and giving back to the community to anyone to install, tweak or hack it. 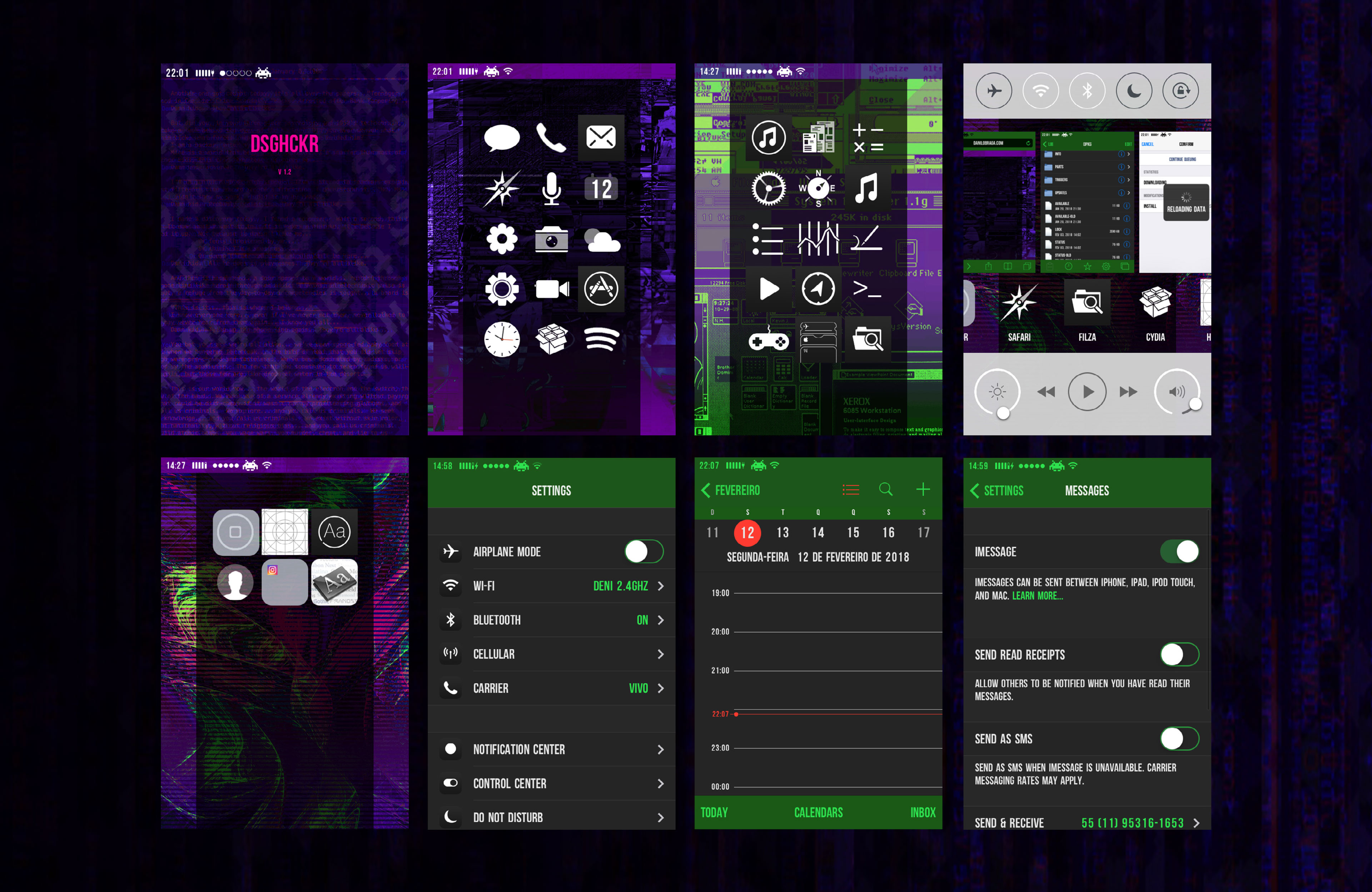 Screenshots from the prototype: early computing hacking inspired the visual language for customization